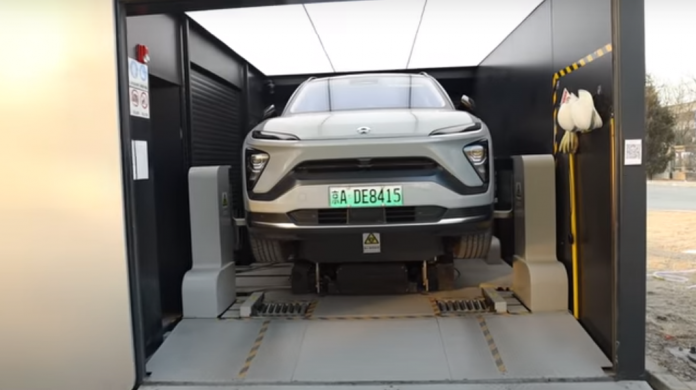 Over the years, the EV industry has long wanted to find a solution for battery swapping in order to overcome the high costs of charging and replacing batteries.

Some of the EV companies that tried to achieve this are Better Palace and Tesla.

Many industry onlookers were fascinated by Better Place when they joined with Renault. Their objective is to launch a new electric sedan with robotic battery service stations located across Israel and Denmark.

Due to limited market demand for electric vehicles at that time, they went out of business due to high investment of building large battery swapping stations in limited locations.

Tesla tried a different approach to battery swapping as it started in the U.S. around the same time as Better Place.

Due to battery swapping not being very popular and only a few Tesla owners have used swapping stations, they tried to focus on faster charging options in Supercharger technology.

The further development of this technology in the U.S. contributes more to consumer disinterest in battery swapping technology. Because of this, battery swapping becomes an alternative or a secondary option to Supercharger for Tesla owners.

NIO’s installation of multiple power swap stations across numerous cities in China provides even greater availability than what Better Place has done.

NIO also offers another service called “Baas” or Batter as a Service that is very unique to the EV industry. This service allows the customers the choice of buying a vehicle with or without a battery.

Lowers the price of vehicle by 20%

An ES6 starts at about $52,000 when purchased with a 70kWh battery while with Baas, the vehicle costs about $42,000 and leases the battery separately. This literally gives the buyer a $10,000 off the vehicle price.  The leasing price of a 70kWh battery pack with six times swap per month is about $140 while 100kWh pricing will be slightly higher.

Security on battery capacity and flexibility

Every battery pack in NIO’s Power Swap stations goes through a thorough electrical performance inspection after removing from a vehicle. The detected fault batteries are subject for repairs to ensure the safety of all batteries in the system. The batteries with good condition are lined-up for recharging and on stand-by for the next user.

The customer has the ability to lease a larger battery pack depending on the type of usage they need. There is also a good option for customers that are planning on a long trip. They can lease a 100kWh battery for just a month and swap it back when the month is over. They can also choose to keep this 100kWh battery back and continue with its monthly leasing fee. All NIO’s multiple car models also use the same battery packs that makes the battery swapping more easily.

The average gas monthly expenses in China for an X3, a GLC or a Q5 is about $140. This cost is as much as the monthly battery lease payment of NIO.

NIO has also already built over 30,000 Power Home chargers in China.  They currently have 143 battery swap stations across different cities in China. The company also completed more than 750,000 battery swaps with roughly 4,000 swaps every day.

Being a premium brand in China, NIO competes with other brands like BMW, Audi, and Mercedes. NIO uses their technical advantage of 1,200 patents for their battery pack, vehicle, power-swap stations, and cloud-based scheduling system.

NIO also believes that their battery swapping technology and strategy will be a huge step to elevates the EV industry to the next level.