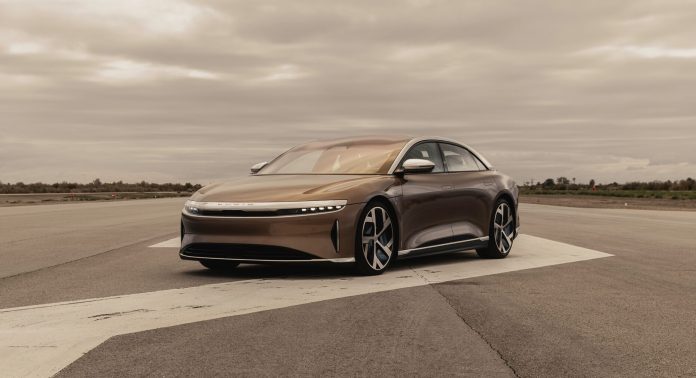 Lucid Motors fully unveiled the first production version of its powerful luxury electric car, the Lucid Air.  The company claims that Lucid Air is the most aero-efficient, longest range, and fastest charging electric vehicle to date.

The event took place online at the company’s Silicon Valley headquarters last September 9, 2020 where the details of interior and exterior designs, specifications, configurations and pricing were all revealed.

Before the event, Lucid’s current CEO Peter Rawlinson claimed that the debut of  the production version of the Lucid Air will set a new benchmark for electric vehicles, and a landmark for cars. Even though Lucid Air is said to have Tesla DNA running through it due to Peter being the former Model S Lead Engineer and VP of Engineering at Tesla, it seems to outperform the Model S in a variety of categories.

Founded as Atieva in 2007, the company started by making high performance batteries for Formula E racing cars. It then changed its name to Lucid Motors in 2016 and decided to create its first flagship electric sedan.

With over a decade in the making, the electric sedan was supposed to be revealed at the New York Auto show earlier this year but got delayed due to a coronavirus pandemic.

“When we embarked on this journey at Lucid Motors and the development of our first vehicle, the Lucid Air, we refused to compromise. We decided early on that we were going to pursue every facet of performance, innovation, and luxury,” said Derek Jenkins, VP of design for Lucid Motors.

Without the restriction of traditional automotive design, Lucid innovates the very concept of a luxury sedan, redefining the shape, proportion, and dimension.

With  close collaboration of the design and aerodynamics teams, they developed its tapered shape design that makes it the world’s most aero-efficient luxury car with a verified 0.21 coefficient of drag. The aero efficiency is evident on the surface of the Lucid Air’s elegant surface and aerodynamically optimized wheel designs that guide air efficiently through and around the car.

Lucid claimed that the big advantage of any Lucid Air version is its interior design.

“This is where the marvel of Lucid packaging and our space content is quite incredible,” said Derek Jenkins. The Air versions offer the space of a large sedan in a midsize car.

Its  interior themes are crafted with colors and materials that invoke its own sense of uniqueness. The vehicle features a “floating” driver information screen behind the steering wheel, an angled control touchscreen in the lower center of the dash, and fingertip activated Quick Touch electric door.

Using the official EPA standard testing procedure at FEV North America, Lucid Air achieved an estimated EPA range of 517 miles on a single charge which tops Tesla’s Model S with a record of 402 miles. According to Rawlinson, the car can achieve a quarter mile in 9.9 seconds which is faster compared to Tesla’s fastest vehicle that reportedly takes 10.4 seconds. Lucid achieved it due to their proprietary technology along with careful engineering consideration on every aspect of the car’s performance and efficiency.

Lucid is also proud of their charging rate which is as fast as 20 miles per minute. With this, Lucid Air sets new benchmarks of being the fastest charging electric vehicle ever offered where having 300 miles of range in just 20 minutes is now a possibility.

CEO Peter Rawlinson stated that Lucid achieved this due to their proprietary technology along with careful engineering consideration on:

“With our ultra-high voltage 900V+ electrical architecture and the proprietary Wunderbox, we have significantly increased the speed of energy getting into, around, and even out of the vehicle, delivering the world’s fastest charging EV packed with future-ready charging features,” said Eric Bach, Vice President of Hardware Engineering.

Lucid Air was designed also with DreamDrive, an advanced driver-assistance system (ADAS). This system has an array of 32 multimodal sensors that include the latest camera, radar, and ultrasonic sensors which gives DreamDrive the ability to function in any weather conditions. DreamDrive will debut with the Lucid air where its Level 2 functionality will include 19 safety, driving, and parking assist features.

Executives also revealed the development of energy storage systems “ESS” product line of stationary for home, business and grid-scale use.

This is somewhat similar to Tesla’s strategy except Lucid partnered with Electrify America in building electric vehicle charging infrastructure.

Lucy said that those early customers who buy the Lucid Air will get 3 years of free charging at these charging stations.

The production is expected to begin production early next year at its plant, which is still under construction in Casa Grande, Arizona, southeast of Phoenix.  From an initial capacity of 34,000 units, Rawlinson believes it will grow to a maximum capacity of 400,000 units toward the end of the decade.

Lucid is now accepting reservations for Air versions: $1,000 for base model and $7,500 for the Dream edition and will be delivered at the start of spring 2021.

Like other EV start-ups and automakers, Lucid is hoping to replicate Tesla’s strategy of selling and eventually top the market.